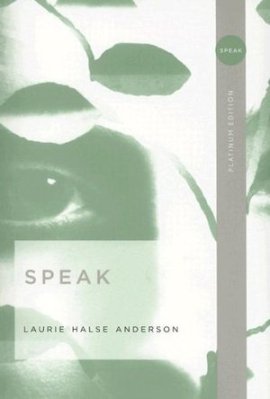 Book Review
Speak
Written by: Laurie Halse Anderson
I’m not sure how well known this book is—it seems to have earned some recognition and it was turned into a movie so I imagine I’m just a bit behind in the ball game here. I picked it up on a paperback table at Barnes and Noble for new editions. Strangely enough, with no prior knowledge of the book, I read the back cover and was hooked. I liked the premise and I had to see how it ended, so I bought it impulsively.
I had it finished within 24 hours. I’m not sure if it’s just a quick read or if I’m just getting to be a faster reader but I really liked it and me finishing a book that quickly is unprecedented. It is an angsty teenage coming of age story nuanced with a lot of serious realities. Despite the fact that I had nothing truly in common with the character, I identified with her. It was so honest and felt so real. Her writing style was a little different and somewhat vague on descriptions which was a little distracting at times for me, but overall she was successful.
All I can say without spoiling the story for others is that I thought the story was very beautiful.
When I found out it was turned into film in 2004 I got a little excited. Then I found out the Kristen Stewart played the main character. Honestly…I can see her being this character, but I still was disappointed since I don’t really respect Kristen Stewart as an actress. She’s always rubbed me the wrong way. Still, outside of Twilight her attempt seems to be to do difficult roles…so…good luck Kristen. If I see the movie I’ll probably review it. Until then…read the book.
—Noelle