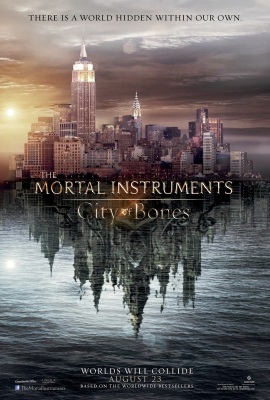 It’s always hard to know whether to read the book first or watch the movie first when a movie comes out based on a book you’d planned to read eventually. The reader in me knows the book is going to be better and loves judging how the movie succeeded or failed at capturing the characters and story. Typically that’s the order I go with. Books are just better if you don’t know how they end. However, it’s hard to really judge whether or not a movie succeeded on it’s own accord when you already know the story. You can much more honestly of assess a movie when you don’t have any background going into it.

In the case of  The Mortal Instruments, the series was barely on my radar. I enjoy young adult literature but this is an oversaturated genre, especially the paranormal romance branch. However, I follow Veronica Roth on twitter and she mentioned seeing the movie in August. A little research on the concept peaked my interest and I decided I wanted to see it but waited until it was at Redbox to rent since my expectations were pretty low. (I bought the book weeks before I rented the movie but it sat in my “to read” pile until after I viewed the movie).

Overall the movie was…okay. It wasn’t terrible (which is what I expected going in). The acting was alright (nothing mind blowing but also not so bad that it was a huge distraction). It was produced well and interesting enough to cause me to immediately start reading the book and to be glad they’re already working on the second movie. Still, it failed in some pretty important areas.

The Story—On it’s own, without any background on the story, I found the movie to be a bit confusing and ambiguous (as did my husband who watched it with me). The background stories that were meant to add clarity just left you scratching your head. Now that I’m into the second book I can see that they were just trying to foreshadow some later revelations but I felt it just muddied the waters. There was more than enough ground to cover in the first movie without trying to set yourself up for a a second by eluding to everything that is to come. The action was disjointed and the characters were not developed very well. I felt all of the characters were underdeveloped and rushed. The romance and subsequent “twist” were both extremely abrupt. Other things would be thrown into the story seemingly just to “get them in there” (because they are in the book) even though they didn’t really work up to it (Alec being gay, the similarity in Jocelyn and Luke’s relationship to Clary and Simons), etc. It was frustrating even before I read the book. I actually started reading the book right away because I wanted to fill in holes that were really blatant in the movie. I’ve seen enough adaptions that get it right to know that this movie failed to present the cohesive dynamic story that they could have presented.

The Changes-–After reading the book, I realized that they actually kept most of the book intact (at least until the end). They even kept a lot of dialogue the same. The story follows the book pretty closely and doesn’t leave out any major events or characters. They changed the right things (having Simon stay human rather than turn into a rat was the right call, combining some of the early events that were spread out over days into a single day was a good move for film) but a few changes were unnecessary or rushed when they were important enough to slow down for. And again, often they rushed into telling you things that happen later in the trilogy and it just isn’t necessary to do that. It’s okay to hint at things, but I felt like this movie just skipped over some of the best drama of the books and told you what was coming. Spoiler alert, geez.

Directing/Acting—I don’t know a ton about Zwart other than the fact that he seems to specialize in movies for a younger demographic. Lily Collins performance was acceptable, but not remarkable. I think her look is perfect for Clary but I’m still on the fence on her as an actress overall. She is hit and miss for me (see The Blind Side, Mirror Mirror, Abduction). I often misidentify her as Vanessa Hudgens (who is a terrible actress) but in reality she’s Phil Collins daughter (which is kind of cool). Jaime Campbell Bower you may know from Twilight. He has kind of a creepy unconventional look but it worked for me. I think the British accent helped. He seemed to get Jase. Jase wasn’t developed well in the movie, but that was the writer’s fault, not Bowers. He did the best he could with what he had. The casting that just really didn’t work for me was Valentine (Jonathan Rhys Meyers)—who I don’t remember ever thinking was a bad actor previously so maybe it was the script, and Alec (Kevin Zegers) who was particularly bad. The casting for Jocelyn and Magnus Bane were the best overall I think even though they were smaller roles. Clary/Jase/Hodge worked, and the rest were simply not memorable one way or the other.

Conclusion—I can’t say it was a good movie, but it was a enough to get me interested in the book which has been much better than its counterpart so far. I plan to read the series and see the next installment when it’s released.

The Mortal Instruments Book One
City of Bones
Written by: Cassandra Clare
The ending to the book was so much better than the movie. Though the end result was basically the same, it played out quite differently. The biggest difference is that the big twist is implied to be a farce in the film and it certainly is believable in the book. The first book mentions nothing about it being untrue. In fact, it’s a huge revelation for everyone in the story that just makes sense. It’s completely believable and if I hadn’t seen the movie I may have bought into it (though of course it’s somewhat obvious that the author can’t allow it to stand. It’s much to risque for a teen fantasy series). I can only assume that the movie skipping ahead to the big reveal was done to keep the audience invested in the romance.
Obviously the biggest advantage to the written word is character development. Jase has a lot more depth in the book (torrid dark backstory) and is more fun in general (more jokes, more sarcasm). Simon is much more of a contender for Clary’s affection in the book as well which makes for a bit of a love triangle that is present in the movie but not emphasized nearly as much. The book certainly filled in the gaps that the movie failed to present. The story makes so much more sense. The world, the background stories—they are much more cohesive. That isn’t to say that the books are brilliant, important additions to literature. They’re aren’t. They are pure entertainment and not much else. They’re quick and easy to read. They’re addictive in the same way that a WB TV show might compare to an HBO show. Clare is no Hemingway. Clare is definitely marketing to teens. But the concept is unique enough, the story is dynamic enough, the characters are layered enough, to make the books addictive and fun. Anything that gets teens reading has my vote and I am enjoying the series immensely.